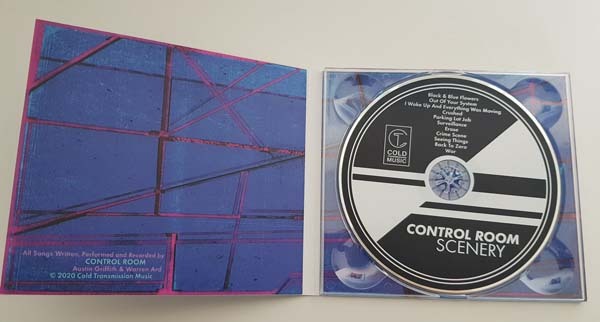 Unlike most other music, modern SynthPop is all about maximum sound with minimal instruments. CONTROL ROOM is a duo whose dense, window-rattling sound will fill your room. Here on their debut album SCENERY, they conjure a subtle yet distinct spin on the classic synth and post-punk sound. On bass, Austin Griffith’s subsonic lows fill your chest cavity. His downstroke rhythms dictate your breathing for the duration of the song. That leaves the twilight-colored synths of Warren Ard to intertwine with Griffith’s bellow as your guide through the various emotional waves of life. Anticipation. Angst. Longing. Acceptance. Release. It’s all here.

When Punk famously fizzled, it was the so-called Post Punkers who extracted its ashes and created music whose influence and presence were longer lasting. Hattiesburg, Mississippi duo Control Room is the latest in the continuum of artists stretching minimal electronics to best express just how they cope with another person's lack of humanity. "Retreat" echoes the formative years of Post Punk in bassist/vocalist Austin Griffith's haunting vocals. While Griffith sings economically about the idiosyncrasies of the world, synthesist Warren Ard drapes each song with the perfect, ever-changing blend of classic monosynth sounds.

Their songs interweave the darkness of Joy Division, the raw Pop sensibility of OMD and even echo the danceable SynthPop years of The Cure. Elegantly written and arranged, the synth sounds feel both correct for the era and modern enough for today. With their phalanx of machinery, Ard and Griffith make Electronic music remarkably human again. Control Room released their first EP, Retreat in October of 2018. They appeared on the Dinosaur jr. tribute album from The Blog That Celebrates Itself. They regularly play shows locally.