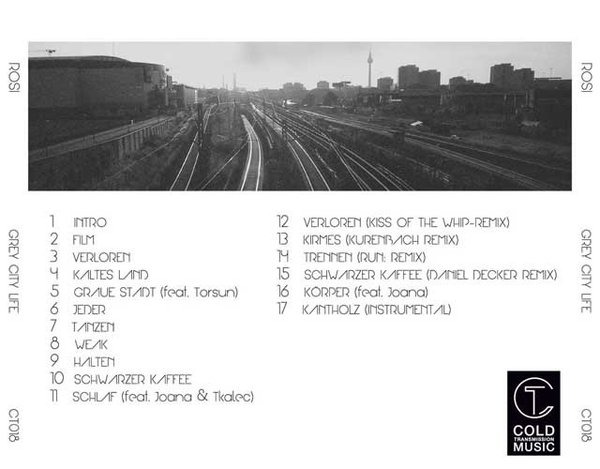 Post-Punk is hip again ... could be said maliciously, but for the duo ROSI from Bielefeld/Germany it is not only a phrase. The two musicians Sven Rosenkötter and Mirco Rappsilber have a lot experience in various bands and also enough life-experience to play this dark New Wave sound with great credibility. Their 2016 debut LP „Grey City Life“ and many concerts attracted some attention, which increased in 2018 with the again selfproduced (with production support from Jan-Niklas Jansen and mastering by Daniel Husayn of North London Bomb Factory) follow up „Hope“ (on Vinyl and CD). ROSI present the music more raw and very intense on stage, which always impresses the audiences in Germany and other countries. It's no surprise, that someone described the band as „Sad Dance Band“, which is strongly to the point. In autumn 2018 ROSI signed their first record deal with Cold Transmission Music, so 2019 promises to become a very notable year for the duo. This re-release of their debut album features some remarkable remixes and previously unreleaed tracks.